Meet the US Army Sergeant Ron Smith. Ron served in support of various missions within the United States, Iraq, and Germany, but was forced to retire early due to a traumatic brain injury. Here is his story about how he started exercising, his remarkable improvements and achievements, his injury, and how he recovered by being disciplined with daily exercises. Ron now gives classes at Fiteverywhere, Poznan, Poland about “How To Get Strong”.

How did you start exercising? What sports did you engage with as a kid and teenager?

Although I tried every team sport during elementary school, by high school I didn’t do any sports or training. When I joined the military my level of fitness was very low.

The United States Army tests the fitness of Soldiers with a Physical Fitness Test that consists of two minutes of push-ups, two minutes of sit-up and a 2-Mile run. In order for a male to get a maximum of 300 points they need to do 75 push-ups, 82 sit-ups, and a 13:00 min 2-Mile run.

The U.S. Army’s physical fitness program is very heavy on running and calisthenics*(see end of text for description), and for basic physical fitness and body composition this is fine, but I aspired to stand above my peers. During the first year of my military training I only conducted the prescribed morning training and, although my fitness did improve, once I added extra weight training I made huge leaps and bounds in both strength and speed. Within a year my push-ups and sit-ups were maxed out and my run time had dropped from 16:00 mins to 13:00 mins. Over the next few years I whittled my run time down to an all-time best of 11:45, which for my body type is pretty quick.

Ron, what is your philosophy about training and exercise? Why do you exercise?

Having my level of fitness tied to work performance, promotions, and fun training and schools, it was easy to be motivated to go to the gym. Even when working 14+ hour shifts I made time for an intense 45 minutes training session almost every day. Now after years of this attitude, I have to workout to get my day started. There may be studies about an evening hormonal peak aiding in performance, but the most effective workout is the one you actually do. Conducting training first thing in the morning ensured there is no excuse of reason to skip training for the day. Work and home life can be stressful and filled with obstacles to fitness, but getting training out of the work first thing gives you the best chance for success. Physical fitness is not a sprint, but a marathon. Those in peak physical condition have spent years of dedicated training to get that way. Consistency is key.

Sometimes this level of drive is less than sensible. In 2011, I sustained a traumatic brain injury (TBI) while serving in Iraq. It was a concussion, I only lost consciousness for a second or two, and I felt fine after. It happened right at the end of the deployment, so I could recover at home. I didn’t have any headaches, but I just felt high energy and angry all the time for months. During this time I was only sleeping every three days and eating one meal a day. I was also running at least 10 miles a day every day, and 20+ a day on weekend. I dropped from 85 to 75 kilos and looked unhealthy. I didn’t see a doctor about my TBI and it eventually sorted itself out.

Again in 2013 I sustained a much more serious TBI. It was completely random, I was making photocopies on base in Germany and I just felt sort of weird. I asked my wife to drive me home and by the time we got there my right side had gone numb. I spent 2 weeks in a German hospital and 3 more in an American one in Landstuhl. As soon as I was released from the hospital I went to the gym.

The doctors never found the cause of the TBI, but the result was a lesion in my midbrain. This caused right sided numbness, gate issues, and gaze palsy. The numbness improved over a few months, but I still have a deficit. The biggest issue is with my eyes. My eyes now longer communicate correctly with my, so I am left with ever shifting double vision. This means I can’t drive, and my reading speed has dropped precipitously. It has now been a few years and I have adapted, but because the variance constantly shifts it is impossible to judge distance and there is no sign it will ever improve.

For the first few months I slept 16+ hours a day and could hardly do anything, but now my energy is more or less back to normal. I get frequent headaches from the vision, but besides that I feel pretty good. Overall I don’t really feel limited by the injury anymore.

How do you exercise in a week today?

My previous fitness goals provided a good distraction to my new limitations, but moves like heavy power cleans were not a good idea. I sustained a lot of injuries due to loss of feeling and control of my right side which included my hand. This meant sub-par form and a lot of missed lifts.

Since my medical retirement, I have had to retune my physical training and fitness goals. Issues with nerves in my feet make running not so much fun. I still keep my 5K time under 21:00 and if I push it I still can run in the 19’s but it’s not pretty. This is a little off from my all-time best of 18:56, but still pretty quick considering I only run once a week. Because my brain’s connection to my right foot is deadened my ankle is fairly lax and it is hard to cue the muscles for every foot fall.

Due to the aforementioned issues, I have shifted my focus to strength. During my time in the military I hardly lifted over 100 kg. A heavy squat workout, that would leave me sore for days, would affect my running ability during the group morning workouts, so I focused on more body-building style pump workouts. These workouts can be fun and the pump can help flush waste products out of the muscles, but for my body type I had reached a plateau. 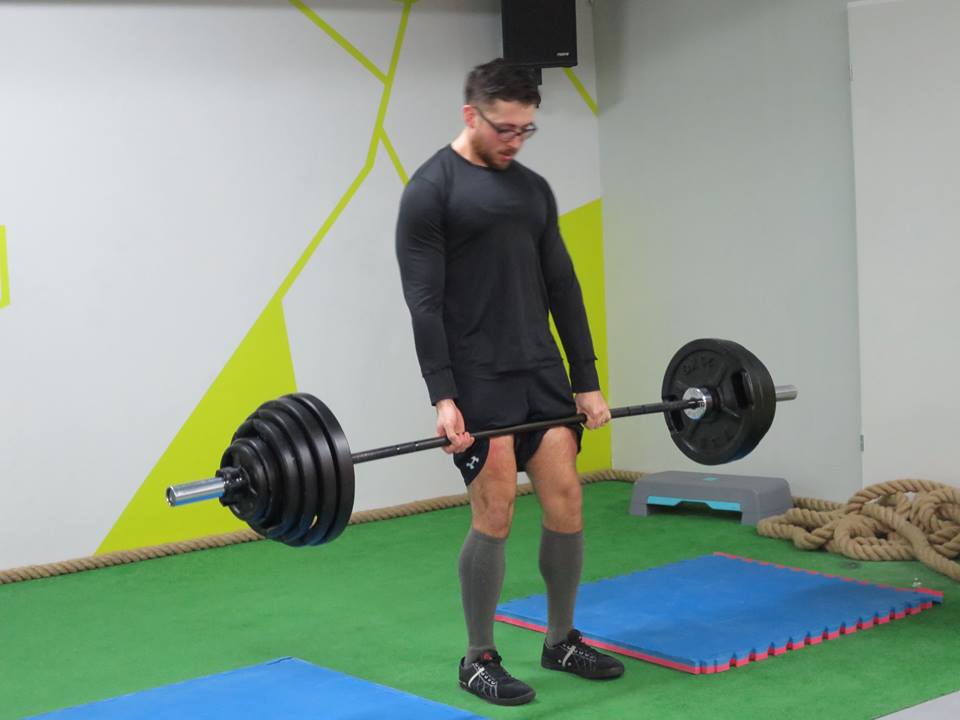 Switching to a strength focused training style was so much more rewarding. My Deadlift, Squat, and Bench-press went from 100kg all around to 195kg, 175kg, 160kg respectively. These strength gains also had a better effect on my body composition overall. Although I have maintained my weight of 85 kg for years, my amount of muscle has increased along with my strength. Also I feel better. The 14+ miles of running every week was rough on my body. At the height of my military career I was doing the prescribed morning Army fitness, weight lifting, and at least two 20+miles ruck marches a week. Being 23, I felt invincible even though I was icing my knees to get to sleep at night.

Now when I am sore, it is rewarding muscle soreness, not joint pain. My workouts have also become much simpler. Focusing on three big lifts, with accessory bodyweight movements like push-ups, planks, and pull-ups I maintain and improve my level of fitness with the lowest training time ever.

Not unlike my fitness goals, my professional/academic goals have changed since my retirement.  As of right now I am in consideration for a few master’s programs within Europe.  Provided the Department of Veterans Affairs certifies the aforementioned programs, I hope to be moving my family to Scotland in September of this year to study medieval history and literature, specifically that of the Vikings.

“Exercises consisting of a variety of gross motor movements, often rhythmical, generally without using equipment or apparatus, thus in all essence body-weight training. They are intended to increase body strength, body fitness, and flexibility, through movements such as pulling or pushing oneself up, bending, jumping, or swinging, using only one’s body weight for resistance. They are usually conducted in concert with stretches. When performed vigorously and with variety, calisthenics can provide the benefits of muscular and aerobic conditioning, in addition to improving psychomotor skills such as balance, agility and coordination.

Postat i Exercise & Nutrition, Startpage, Training & Workouts
We use cookies on our website to give you the most relevant experience by remembering your preferences and repeat visits. By clicking “Accept All”, you consent to the use of ALL the cookies. However, you may visit "Cookie Settings" to provide a controlled consent.
Cookie SettingsAccept All
Manage consent

This website uses cookies to improve your experience while you navigate through the website. Out of these, the cookies that are categorized as necessary are stored on your browser as they are essential for the working of basic functionalities of the website. We also use third-party cookies that help us analyze and understand how you use this website. These cookies will be stored in your browser only with your consent. You also have the option to opt-out of these cookies. But opting out of some of these cookies may affect your browsing experience.
Necessary Alltid aktiverad
Necessary cookies are absolutely essential for the website to function properly. These cookies ensure basic functionalities and security features of the website, anonymously.
Functional
Functional cookies help to perform certain functionalities like sharing the content of the website on social media platforms, collect feedbacks, and other third-party features.
Performance
Performance cookies are used to understand and analyze the key performance indexes of the website which helps in delivering a better user experience for the visitors.
Analytics
Analytical cookies are used to understand how visitors interact with the website. These cookies help provide information on metrics the number of visitors, bounce rate, traffic source, etc.
Advertisement
Advertisement cookies are used to provide visitors with relevant ads and marketing campaigns. These cookies track visitors across websites and collect information to provide customized ads.
Others
Other uncategorized cookies are those that are being analyzed and have not been classified into a category as yet.
SPARA OCH ACCEPTERA